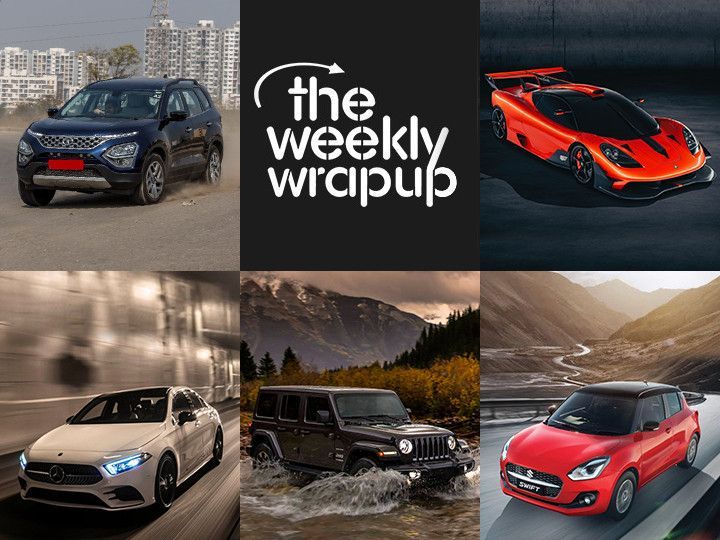 The last seven days for the auto industry was a pretty busy one, which included two car launches, car launch dates being announced, as well as a hardcore track-ready hypercar being unveiled. Here’s more about what transpired:

The week kicked off with Tata Motors’ latest flagship model, the Safari finally being launched in the country. It is pretty much a third-row version of the Harrier, offered in six variants, 6- and 7-seater layouts and is powered by a 2.0-litre diesel engine with manual and automatic transmissions. Aside from the addition of a third row, the Safari has some distinctions over the Harrier and also gets additional premiums. This has led to a premium over the Harrier, which you can read more about here.

Maruti Suzuki Swift Gets A Facelift

One of India’s most popular hatchbacks, the Swift has gotten a mid-life facelift. While the updates may not have made a massive difference, there are visual tweaks, a new dual-tone option, and some feature additions. The main update of course is a more powerful K-Series 1.2-litre Dual Jet petrol engine that’s also present in the Baleno and Dzire. Of course all this has led to a fairly modest price hike, which you can read more about here.

This week also saw Stellantis India reveal a launch date for  its next locally assembled Jeep model, the Wrangler. It will be imported as a completely-knocked-down (CKD) unit and assembled at Jeep’s Ranjangaon facility. Two variants will be on offer, with the engine likely being a 2.0-litre turbo petrol and  2.2-litre diesel motor. Pre-bookings have already commenced on Jeep India’s website. To know more about its expected price tag and when it’ll go on sale in India, head here.

It took quite a while, no thanks to the COVID-19 pandemic, but Mercedes-Benz India is finally ready to launch the A-Class Limousine. It will be the carmaker’s new entry level model, sporting a curvy design, boatload of features and offered in standard and an AMG 35 trim. To know more about when it’ll launch in the country, and its expected pricing, head here.

Hyundai 7-Seater SUV Gets A Name

Hyundai’s upcoming Creta-based 7-seater SUV will be called the Alcazar. Aside from the increase in length, the Alcazar will have elements to make it stand out from the Creta. It’ll also be offered in 6- or 7-seater layouts. Also expect a few additional features over the Creta. Details on when it might debut in India can be found here.

The T.50 Gets Spicier

In other news, Gordon Murray Automotive managed to make the already hardcore T.50, even more of a beast, by unveling the track-focused T.50s Niki Lauda. Named in honor of the legendary three-time Formula One champion, the T.50s Niki Lauda does live up to the name in a ‘no frills’ manner, with a screaming 725PS naturally aspirated 3.9-litre Cosworth GMA V12 engine, bonkers aerodynamics and driver-focused tech. To know more about its insane capabilities, head here.