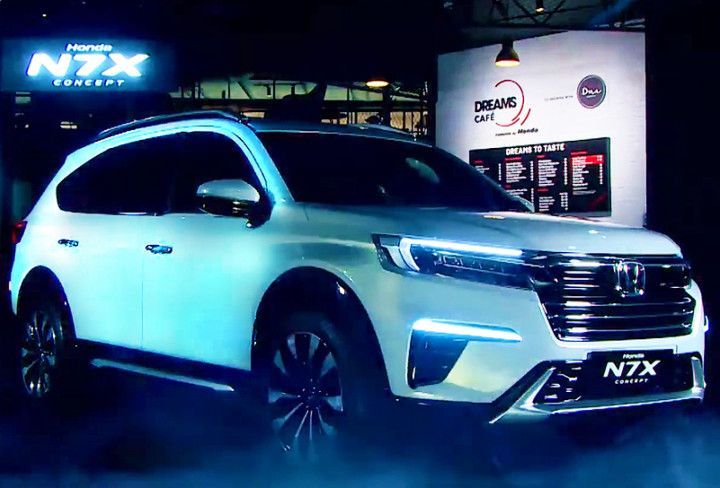 Honda has taken the wraps off the N7X concept in Indonesia, previewing the upcoming seven-seater SUV, which will replace the BR-V. In fact, Honda has taken the same approach as the BR-V, considering the new crossover will likely be based on the Amaze’s platform.

Honda says “This concept car adopts the various advantages of the Multi Purpose Vehicle (MPV) and Sport Utility Vehicle (SUV) to create a complete 7-seater car for use in various road conditions.”

As with all Honda concepts, the N7X seems almost production-ready. A large chrome-studded grille is flanked by sleek LED headlamps. The DRLs on the headlamps and bumper look distinct. Thanks to the silver cladding and air dams, the seven-seater SUV looks aggressive.

In contrast, the N7X’s rear three quarter looks MPV-ish. Save for the new City-like tail lamps, the rest of the rear design is pretty similar to the BR-V. Elements like a sharp, well-defined character line (similar to the City and Amaze) and body cladding around the wheel arches spruce up the styling.

Honda is yet to reveal the N7X’s interior, but snippets from the live event have revealed the dashboard  design, which looks similar to the Amaze. It is quite a minimally done dash with generous use of gloss black trims. Also, the all-black theme contributes to the sporty appearance.

The Japanese carmaker is yet to reveal the engine, but we suspect the crossover will get the same 1.5-litre petrol engine as the BR-V. It should come with both manual and automatic transmissions.

Compact seven-seater SUVs have always been popular in Indonesia. The proof of the pudding is Kia launching an Indonesia-specific seven-seater Sonet. However, the N7X is unlikely to make it to India, considering the Mobilio and BR-V didn’t fare well here.