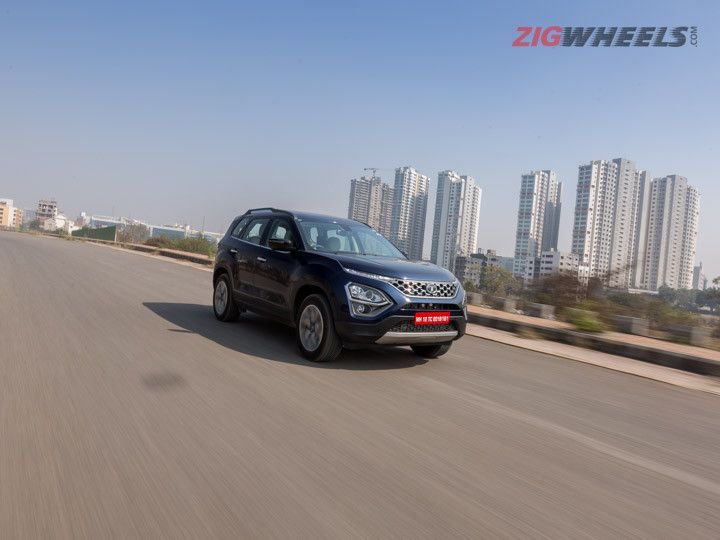 Tata has finally launched the latest iteration of its flagship model, the Safari. It comes with a few distinctive features and design elements over the Harrier (that it’s based on). The three-row Safari is available in both 6-seater and 7-seater layouts and is powered by a 170PS/350Nm 2.0-litre diesel engine. Transmission options include a 6-speed manual and a torque converter automatic.

However, it is the Safari’s pricing that draws one’s attention. The asking price ranges from Rs 14.69 lakh to Rs 21.45 lakh (ex-showroom), pitting it against not just its direct competitors (read the MG Hector Plus and Mahindra XUV500) but select 5-seater premium compact SUVs and mid-sized sedans as well.

The three-row SUV based on the MG Hector is more affordable than the Safari by a lakh. Like the Safari, the Hector Plus too offers 6-seater and 7-seater configurations. The SUV’s 10.4-inch touchscreen infotainment system is the biggest in the segment, featuring several connected car features such as remote-engine start/stop and cabin pre-cool. The Hector Plus also gets a powered tailgate, full LED lighting up front, and front ventilated seats — features that both the Safari and XUV500 miss out on. Under the hood, the Hector Plus utilises the same FCA-sourced 2.0-litre diesel engine as that of the Safari but misses out on an automatic gearbox option.

Being the oldest model here, the XUV500 misses out on some premium features like auto headlamps and auto wipers. It still manages to match its competition by offering the essentials such as smartphone-connectivity, auto climate control, and cruise control. At 155 PS, its 2.2-litre mHawk diesel engine may not be the most powerful but is certainly torquier than its rivals (360Nm). Like the Safari, The XUV500 gets an optional 6-speed AT, along with the standard 6-speed manual.

If practicality is your priority, then the Innova is a better choice. It not only gets three rows but also two engine options. The recent facelift has seen the Innova get more premium features, including Android Auto and Apple CarPlay, and front parking sensors. Safety is taken care of by seven airbags (the Safari has six). Extra features available include connected car technology, geofencing, and real-time vehicle tracking. Over the years, the Innova Crysta has built its reputation around reliability, and is certainly an alternative worth considering.

While its base variants are much more affordable when compared to the Safari, the top-end manual and automatic variants of the turbo petrol and diesel-powered Creta puts it in the same boat as the Safari’s base-spec and mid-spec variants. The 5-seater SUV comes loaded with features and is a frontrunner in its segment. Some features in the Creta that the Safari misses out on include ventilated front seats, air purifier and a bigger 10.25-inch touchscreen. The Creta doesn’t directly compete with the Safari, but that may change soon, as there may be a 7-seater version in the works.

The Seltos was Kia’s debut model in India. Like the Creta, the prices of the top-spec variants of the Seltos overlap with the lower-spec variants of the Safari. The Seltos, like the Creta, comes filled to the brim with features and is also a heavyweight in its segment. The Seltos gets quite a few features over the Safari such as an air purifier, a bigger 10.25-inch touchscreen infotainment system (Safari gets an 8.8-inch one), and a camera-based blind spot monitoring system. Opting for the Seltos makes sense if you’re looking for a 5-seater SUV that offers comfort and convenience.

The Compass recently underwent a facelift, and gets premium features such as connected car tech, panoramic sunroof, ventilated front seats, and a massive 10.25-inch digital driver’s display which is bigger than the touchscreen infotainment system (10.1-inch). That said, you will have to shell out extra bucks over the Safari if you’re aiming for the top-end variants of the Compass.

If the extra row of seats is not a priority, and a big car with road presence is not required to stroke your ego, then the Elantra could be considered as an alternative. The premium mid-size sedan fits right in the same price range and gets premium features such as ventilated front seats, dual-zone climate control, electric sunroof, and an 8-speaker Infinity sound system. The Elantra is available with both a petrol engine and a diesel engine (which is borrowed from the Creta).