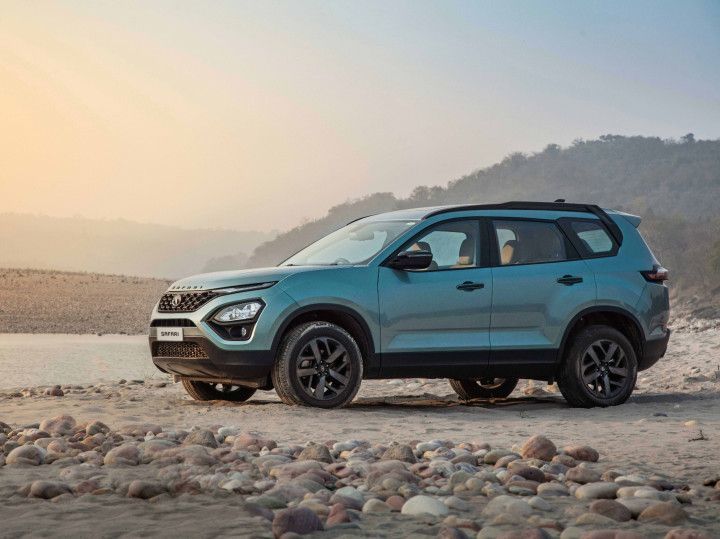 The Safari makes a comeback in its latest iteration, with prices starting from Rs 14.69 lakh (ex-showroom). Available in a total of nine variants, the new Safari commands a premium of up to Rs 1.35 lakh over the Harrier. Like its 5-seater sibling, which gets stylish Camo and Dark editions, Tata offers the Safari with an Adventure Edition based on the top-spec XZ+/XZA+ variants. It gets a host of cosmetic embellishments for distinction. Let’s take a closer look:

For starters, the Adventure Edition is only offered in a ‘Tropical Mist’ exterior shade. You can’t get this edition in any other exterior colour. Also, notice ‘Safari’ boldly embossed on the hood.

Tata has opted for dechroming all around and we quite like it. The grille, door handles, headlamp surround, window line, badging, and even the roof rails are finished in glossy black. All these bits are finished in chrome on the standard model.

Even the standard model’s silver elements on the front and rear bumpers have been replaced by black as seen in the refreshed Harrier. The 18-inch alloy wheels, whose design is similar to the standard Safari, is finished in gunmetal grey.

Step inside and you’ll notice the black-white dashboard has been replaced by an all-black unit, well, except for the bit in the centre console.

Keeping the Adventure theme in mind, the seats and door pads are finished in light brown. It should be relatively easier to maintain than the standard model’s white upholstery. The Safari Adventure Edition can be had either as a 6-seater or 7-seater. Based on our first impressions, we recommend the bench seat version.

Since the Adventure Edition is based on the top-end variant, it gets all the bells and whistles such as an 8.8-inch infotainment system with connected car tech, Android Auto and Apple CarPlay, a panoramic sunroof, a 320W 9-speaker JBL sound system, powered driver’s seat, ambient lighting, and cruise control. Safety is covered by six airbags, ABS with EBD, electronic stability control, electric parking brake with auto hold, and rear parking sensors with camera.

While the Adventure Edition looks ready for a proper expedition, the powertrain is capable of mild adventures as the 170PS 2.0-litre diesel engine only drives the front wheels. It can be had with either a 6-speed manual transmission or a 6-speed torque converter.

ESP-based off-road modes — normal, rough, and wet — as well as the drive modes — eco, city and sport —  come in handy based on your need and the terrain.

The Safari Adventure is priced at Rs 20.20 lakh for the manual variant and Rs 21.45 lakh for the automatic. It commands a premium of up to Rs 21,000 over the standard variants. Considering the upgrades, it’s worth paying the extra if you want a stealthy looking Safari.